The Forecast Channel is a Wii channel dedicated to the display of forecast information that is factory installed on the Wii. It does not have any notable unused content other than its 9/14 banner. 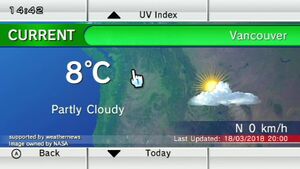 Due to cultural differences, the American and European versions of the Forecast Channel show different icons than that found on Japan region consoles. The Japanese icons are more cartoonish, while the America/Europe versions are more phototorealistic representations of various weather conditions.

The icons for all regions can be found in TPLWeather.tpl.LZ.

The Japan region defaults to a 7-day forecast, while other regions receive a 5-day forecast.

For more information about the regional differences, as well as some version-dependent error messages, see The Cutting Room Floor.