Note: This article is very old and inaccurate, mostly based on guesses and speculation from before data from the Zammis Clark Breach was available.

This article describes the process of how production Wii consoles are set up at the factory, from initial manufacturing of the chips to retail shipment.

Every Wii is preloaded at the hardware level with a few pieces of software; these are already present on the Wii and will run when the Wii is powered on at the factory. The first of these pieces of software is boot0, the first piece of code ran on the Wii after power-on (which will stay the same from when it is physically programmed onto the chip to after factory setup, since it cannot physically be modified), which will check the stored boot1 hash in the Wii's eFuses, and seeing that it is blank (as it is written to later in the process, using up its one opportunity to program it), determines that it is in the factory and continues with boot by loading boot1 from the NAND. boot1 works as usual by verifying the signature of the boot2 on the NAND, then loading it.

Next, boot2 loads; the version of boot2 installed at the factory is "sd_boot", a special boot2 which does not read or write to NAND and instead boots from the SD card; a SD card (designated as SD#1) is prepared containing a number of BroadOn-format WAD files (stored raw with no filesystem); one of these files has its contents executed as an ARM binary on the IOP, said file being an installer program which will install the other WADs on the SD card to the NAND. On production systems, this typically includes a NDEV Menu, IOS4, and IOS9, although other variations have been seen such as images which install BC and MIOS. The NDEV Menu will then be booted, allowing for the next phase of setup to occur when a disc is inserted.

At this point, a disc would be inserted to begin the process of setting up the system. While this disc presumably has an official name which is currently unknown, it will be referred to as "123J", as 123J is the GameID of the disc (as evidenced by its presence in the uid.sys logs of all Wiis, as well as other NAND remnants). This disc's exact purpose is unknown as no code from it has been recovered, but it is presumed that it plays the role of setting eFuse bits (which results in setting console-unique keys and finalizing the installed boot1 version), possibly also updating boot1 and boot2 to prepare for the Wii to boot from a production encrypted NAND filesystem. This process likely would be done using a Waikiki from a PC host. This disc may contain a second partition with ID "0000dead".

The next disc inserted is RVL_UJI_DIAG, with GameID 121J. The copy of this disc obtained from an RVT-H Reader includes several testing programs which could be used to ensure the integrity of a unit's hardware, as well as programs that run pre-defined tests, the results of which are then written to testlog.txt. It also contains serNoReg, the program which registers the console's serial number using a mentioned but unseen piece of PC software, and "PreWrite.dol", a program which seems to write data to NAND over EXI (Waikiki); it is unknown if this is used in retail system production or not. 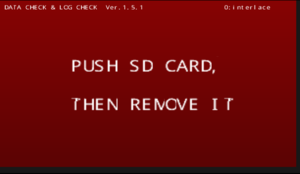 PUSH SD CARD, THEN REMOVE IT 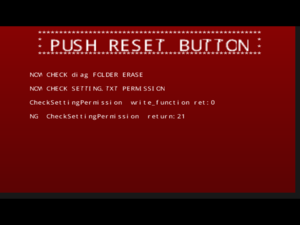 0002 (DATA CHECK & LOG CHECK) is a program which checks the results of 121J to ensure that diagnostics passed and data was written correctly. While this program is meant to be deleted before the process finishes, for unknown reasons it is still present intact on some Wiis and versions 1.5.0 and 1.5.1 have been recovered.