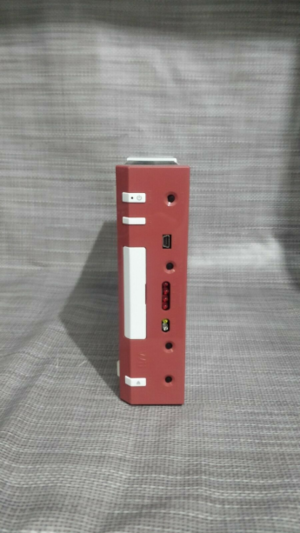 The RVT-H reader. The front of it is red.

The RVT-H Reader (also known as RVL-H Reader) is a Wii development kit which loads titles from an internal hard drive in place of using discs or external disc emulation. Via a series of buttons on the console's front panel (in place of the disc drive) and a USB interface which can be used with PC software, the contents of the hard drive can be managed and the current emulated disc can be switched to the contents of any hard drive bank.

The RVT-H Reader's deletion functionality does not actually delete the contents of the specified hard drive bank, so the data can be recovered.

Earlier RVT-H Reader units used 40GB hard drives, while later ones used 80GB hard drives (presumably as 40GB hard drives were no longer being manufactured), although the bank size is the same so there is no functional difference between these models.

The PC tool rvthtool can be used to manage the contents of an RVT-H Reader without using official Nintendo software, in addition to functionality such as resigning/encrypting disc images and restoring 'deleted' data from an RVT-H Reader's hard drive.

RVT-H Reader units were intended for game testing, allowing developers to hold multiple game builds on a single drive and swap between them without having to burn discs.

Like NDEV units, RVT-H Reader units have a 128MB MEM2.

Since RVT-H Reader units are the only Wii development kits which can store full disk images on the console itself, there is the possibility for unreleased games, internal tools and other software to be found on a RVT-H Reader; various game prototypes and other programs have been recovered in this way, such as The Last Story prototypes and RVL_DIAG.