This is the prototype black Wii casing seen at E3 2005. It was notably later re-used for the E3 2006 RVT-R Reader, however it is not known if the casing was used besides product showings and the E3 RVT-R Reader, as a different white case with a Nintendo logo was used at GDC2006.

Besides black, this case was also to be shipped in the following colors, according to an E3 2005 promo image:

The white color was later adopted as the main color for the system, and the red one was used for a later special edition. The original black color itself was later used for the (infamously LU64+) black Wii. 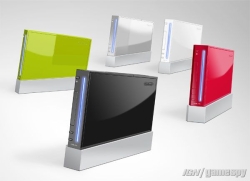 Different color variations of the case.
Retrieved from "https://wiki.raregamingdump.ca/index.php?title=E3_2005_Revolution_Case&oldid=4452"
Categories: