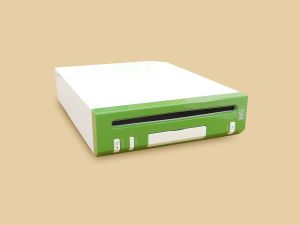 The RVT-R reader. The front of it is green.

The RVT-R Reader (also known as RVL-R Reader) is a debug version of the Wii that uses an optical drive. There are two known versions of the RVT-R Reader; the normal one, and the E3 2006 one which posesses the E3 2005 Revolution Case.

The RVT-R Reader can only boot games from discs and does not have any internal storage for disc games, only WiiWare & Virtual Console games. The RVT-H Reader is the only Wii development unit which can store disc games.

The E3 2006 version of the RVT-R Reader is notable for using the black E3 2005 Revolution Case, as well as being exceedingly elusive with little information about it being known. Its existence is known through it being mentioned in various SDK documents, which also specify that its serial number format is as follows: RTPAB2xxx. It is possible that this system contains one of the Pre-Production Boards mentioned in OSGetConsoleType. 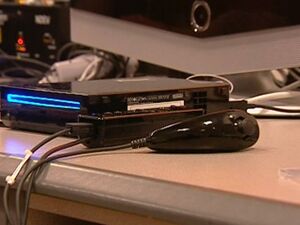