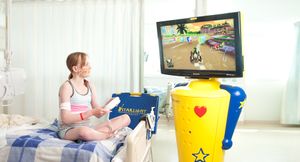 The Starlight Fun Centers (Fun Centres in the UK) are a series of units made by the Starlight Children's Foundation in cooperation with Nintendo to distribute Nintendo game consoles for use in hospitals. Starlight units exist for Nintendo consoles from the SNES to the Nintendo Switch, although most of these are simply retail consoles in a special case with a TV attached; the Wii Fun Center is unique for using a special Wii console with a hard drive in place of an optical disc drive (similar to the RVT-H Reader), as well as using a special game loading menu.

The Wii Starlight unit is based on an RVT-R Reader, with the disc drive replaced with a drive emulator board which connects to an IDE hard drive and loads games from it. This drive has an ATA password set and is encrypted (an encryption chip on the emulator board is used to decrypt it), while the drive emulator board handles the logic of translating the Wii's disc requests into reads to the hard drive, as well as the decryption logic. The board also includes a "dev port" for updating the data on the hard drive.

Notably, the drive emulator board will not function unless the 'controller select board' is connected; this is a board which handles the selection of different controller peripherals via the switch on the front of the kiosk.

The Wii Fun Center includes a unique game selection menu program, which is loaded from the hard drive; as described in the patent for the Starlight Fun Center[1], this program sends commands to the drive to switch between banks (similar to what is present on the RVT-H Reader) and load different games.

The system boots initially using a modified version of the NDEV Menu based on version 1.10 (which is also found on the RVT-R Reader PP4 unit).

The Wii U and Switch Fun Center units are retail consoles, loading games from USB and the microSD card respectively. 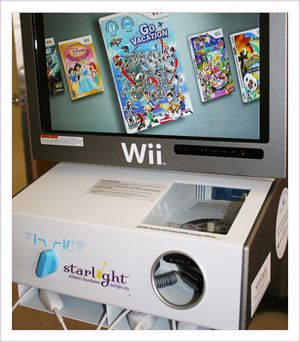