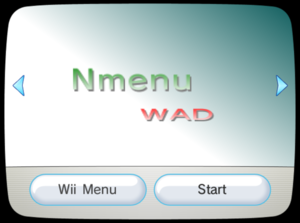 Nmenu (known on its banner as Nmenu WAD) is a Wii developer application used to install WADs. It is similar to the 3DS and Switch's DevMenu.

Interestingly, the "NMenu" name is also on the RVL_DIAG menu and the menu for GameCube DIAG version 3.1. It may stand for "NNGC Menu" ("NNGC" being an early development codename for the Wii), as the menu version used in DIAG 3.1 is an early one and it is possible that it was created specifically for Wii or Wii-related tools. This version of NMenu bears little resemblance to the one in the SDK, and serves a completely different function (launching programs from a disc and reading a list of files rather than viewing titles from NAND and installing WADs). 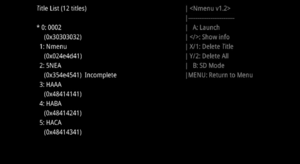 Nmenu WAD as present in the SDK. Note the version number, which is earlier than that of the RVL_UJI_DIAG version despite this being a newer version. 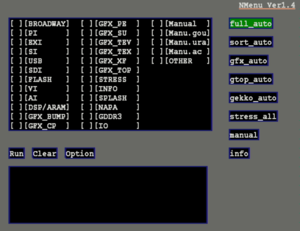 NMenu as present in RVL_UJI_DIAG. The disc and this version of NMenu are dated to around August 2006, but the version number is later than the SDK version. Note that the capitalization of M in Menu may be a subtle distinction as to this being a different version than the SDK version.