This topic has a Wikia article on the Nintendo Wikia. For more information, check here. 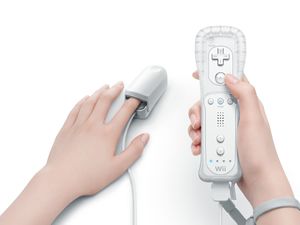 The Wii Vitality Sensor is a cancelled accessory for the Wii where you put your finger in a slot and it apparently would show your heartbeat. It was shown at E3 2009.

A trademark was filed for "Wii Relax", which possibly would be a game in the Wii series that used the Wii Vitality Sensor.

Ultimately, the accessory was cancelled, due to not everyone being able to use it correctly (it only worked for 90% of the testers that tried it, and it had to work with 100% of the testers).