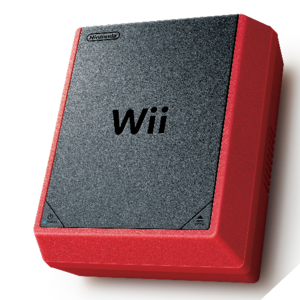 The Wii Mini (RVL-201/RVO) is a cut-down version of the Wii system which removes the SD card slot, online functionality, and one USB port. It has a limited software environment removing features related to these related pieces of hardware, such as SD card data management and channels depending on online functionality.

Due to these removed features, the Wii Mini was considered very difficult to hack. However, in 2019, several years after the console released, a new exploit called BlueBomb made the Wii mini hackable. It uses Bluetooth, and it also works on regular Wiis, and can be used to unbrick it.

The Wii Mini features provisions for GameCube ports despite these ports being removed, similar to the Wii Family Edition. It also features pads to install WiFi hardware, and a SD card slot has been successfully soldered on.