E3 2006 was the event where Nintendo fully unveiled the Wii and its final branding, as well as introducing several new DS titles.

Most of the Wii's final launch software lineup, and some post-launch software including Super Mario Galaxy was revealed. This includes a variety of prototype hardware and software such as the early Virtual Console menu.

A playable demo of Super Mario Galaxy was playable at E3 2006. This demo gives a basic idea of how the game works, and features a lot of differences from the final release.

The gameplay in this demo is mostly similar to the final game. The normal Mario moveset of running, jumping, long jumping, etc are there, as well as the new spin jump. The demo has you travel through a galaxy that contains a variety of bosses, as well as segments of levels that are found in the final game. The demo takes you through early versions of Good Egg Galaxy, Space Junk Galaxy and Bowser Jr's Robot Reactor. The demo allows you to fight King Kaliente, Megaleg and Tarantox. The demo is on a ten minute timer, and the demo ends once the player collects a star or the timer expires. 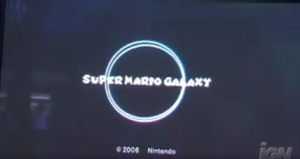 The title screen of the demo.

The title screen is completely different in the demo version compared to the final. The demo will start off with a black screen with the text "Super Mario Galaxy" shown on screen. The screen will then change to show Mario floating in a bubble, which the player will have to pop by pointing and pressing the B button to free him.

Mario has a few differences in the demo version compared to the final version. 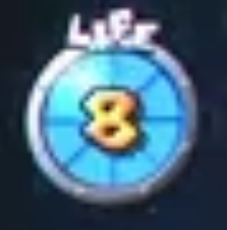 In the demo version, Mario has eight hitpoints, while in the final game this number is reduced to three.

Good Egg Galaxy has a few notable differences compared to the final game.

The starting planet of Good Egg Galaxy showcases a different house that has a much different design compared to the final game. The large tree that is found on the planet resembles a coniferous tree in the demo, compared to the more deciduous styled tree in the final game. On the bottom half of the planet, the layout is mostly similar to the final game, with a few small differences. The exit to this planet in the demo is achieved by a pull star, which propels the player into a sling star, which will throw the player into a launch star, while in the final game, the planet is exited by using a single launch star. Instead of the planets exit leading to the Boulder Planet, it instead brings you to the a cluster of Tropic Planets. 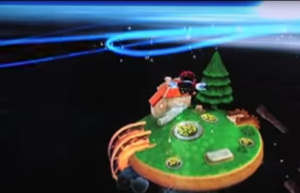 Not much is different on the Asteroid Planet, besides the absence of rolling Chain Chomps which are present in the final release.

The Octopus Airships have a few differences between the demo and the final game. In the final game, the crate layout is different, and there is a Toad encased in ice located on the first ship, which is already free in the demo. The exit to this planet in the demo uses a sling star, while in the final version of the game, the planet is exited by launch star.

Not much is changed here, besides the star bits encased in ice not being present in the demo version.

In the demo, this planet is just known as "Crystal Maze". This planet is near identical to the final version of the game. 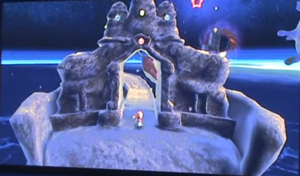 Grave Stone C in the demo version has no enemies to fight, while in the final version, two Spanglers are present.

The only difference on this planet is the Toad, which is red in the demo, but green in the final game.

The only difference in the starting planet, is that the ground is made up of grass instead of dirt.

During their presentation, Nintendo showed off a demo of The Legend of Zelda: Twilight Princess. This demo featured a single dungeon that was toned down in difficulty, so it could easily showcase how the game works.

Despite Nintendo having their new home console, the Wii, make it to store shelves the same year, Nintendo still had some reveals for their current console at the time, the GameCube.

Notable from other companies