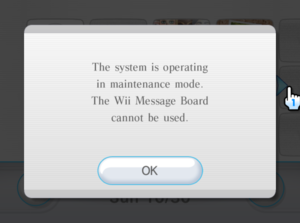 Maintenance Mode is a hidden mode in the Wii System Menu (versions 3.0 and up) accessed by pressing the + and - buttons on the Wii Remote simultaneously while the Health & Safety screen is being displayed, and holding them for 3 seconds. CHANScripts, RSOs, WiiConnect24 and the Wii Message Board are disabled in Maintenance Mode.

The mode was discovered by the homebrew community shortly after its implementation, but its actual purpose was largely unknown; it was eventually discovered via an SDK document that the mode is intended to fix bricks related to banner scripting on development units, and was included in the retail menu for unknown reasons. Earlier theories included removal of personal data for use by repair personnel and it being a mode for fixing general banner bricks (which it is explicitly stated in the SDK to not do).