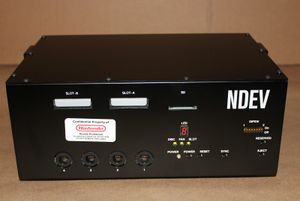 NDEV 2.1 (production), the most common version

The NDEV (product code RVT-001) is the main development system for the Wii, taking the form of a black box including full Wii hardware with 192MB of RAM (the retail system has 88MB; the GDDR3 area on the NDEV is expanded from 64MB to 128MB, as with the RVT-H Reader) as well as debugger, optical disc emulation, and Host I/O hardware.

The NDEV features all the ports and functionality found on a retail system (minus a physical disc drive), as well as 3 additional USB ports and one additional serial (DB9) 115200-baud port. It does not have a disc drive or internal hard drive, so all software is read from NAND or the host system. This means that it can only store WiiWare and Virtual Console titles, and not builds of disc games. The NDEV cannot boot without an attached host system, and can only launch disc titles if they are served using ODEM on the host system. 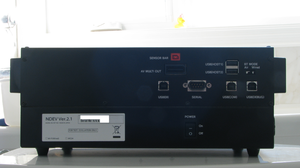 NDEV back (pre-production 2.1 unit; the back is the same as the production unit except for stickers)

The typical development flow using an NDEV is to use the "ndrun" command in the Revolution SDK to launch ODEM to create a simulated optical disc image which runs the associated ELF directly from a filesystem on the host PC. Debug output can be gathered over the serial port as well as through the CodeWarrior IDE using the debug USB port. 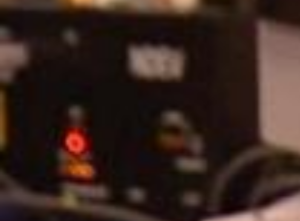 The only known picture of an enclosed NDEV 1.x, cropped from the E3 2006 RVT-R Reader picture 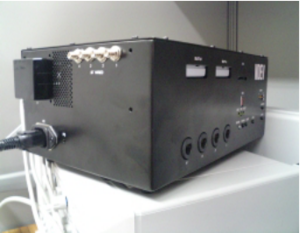 NDEV 1.x were the initial systems used from February 2006 to around June 2006 for internal bringup and third-party game development; there may be some level of discrepancy between those systems used internally and the ones distributed to third-parties, as internal documentation refers to the NDEV 2.0 as the 'main system for game developers' with NDEV 1.x being a bare board intended only for internal bringup, but it is known that some 1.x NDEV units and their associated Revolution SDK (1.0) were briefly distributed to third-party developers.

NDEV 1.x (at least the internal versions) had a number of features not present in 2.0 and later, including:

It is unknown what the exact difference between the NDEV 1.x revisions (known to be NDEV 1.0, 1.1, and 1.2) are, but it is most likely just the Hollywood chip revision since that is how OSGetConsoleType identifies them.

NDEV 2.0 (developed simultaneously with 1.x) includes mostly-final hardware, aside from a few minor bugs as well as the inclusion of 4 wired Wii Remote controller ports (the production 2.1 decreases this to only 1, although a separate "RF splitter" can be used to use all 4). The initial release of the 2.0 did not include wireless controller support, but the "2.01(ES)" revision added it.

Pre-production NDEV 2.1 units also exist; these units are known to have a different serial number sticker on the back as well as having 4 wired controller ports like the 2.0. One such unit is known to have a port for WiFi over RF, but it is unknown if this applies to every unit as the sticker contains a checkbox for if this feature is included or not.

The NDEV 2.1 is the most common and effectively final revision of the NDEV.

Later versions of the SDK OS library also have OSGetConsoleType strings mentioning a "NDEV 3.0" and "NDEV 3.1", possibly for Bollywood or Wii U bringup (early Wii U IOS stuff references it being tested on an NDEV). These were probably not released to third-party developers.

(All information in this section is taken from the NDEV 2.1)

The NDEV contains several boards layered on top of each other, mostly used for the additional system functions not present in the retail Wii.

(Click on each image multiple times for a high-quality version)