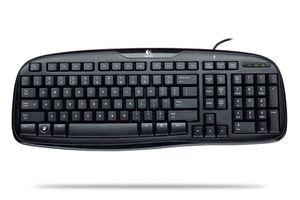 US version of the keyboard.

Japan version of the keyboard.

The Logitech Classic Keyboard 200 is a keyboard made by Logitech that has been advertised to work on the Wii. The keyboard is wired. It was released in the US and Japan (under the Logicool brand, the Japanese name for Logitech). The Japanese version seemed to be sold in both white and black colors.

It was required for this specific keyboard to be tested for games that supported a keyboard in order to pass Lotcheck. (Nintendo also recommended you test the keyboard with the Logitech Cordless Keyboard for Wii.)