DiskCheck is a developer tool used to verify Wii disc images. This is done by testing the disc image for integrity, saving a CRC of the disc, then verifying it. Two versions are available, v1.00 and v1.01; v1.00 does not have a banner, v1.01 does. v1.00 was created before the retail Wii System Menu was distributed to third party developers and was intended to be launched using Nmenu.

This software came bundled with Wii Menu Changer discs for developers, and was primarily used to verify a master image of a disc while testing it or prior to submitting it to Lotcheck.

Oddly enough, WAD installers install it straight to the NAND like a system application like the Mii Channel, Photo Channel, etc. Even a factory reset can't uninstall it, so Nmenu or other title deleters need to be used.

A loop of DiskCheck's banner music by YouTube user thefluffydino 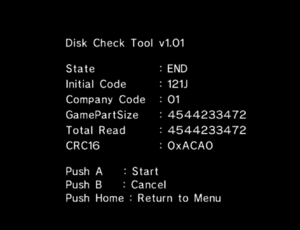