The Nintendo Zone Box is a special DS developed in collaboration with Nintendo and Mitsumi Electronics. This specialized Nintendo DS can connect to Nintendo's official Nintendo Zone server with the use of a cartridge, and is the main device for creating a Nintendo Zone setup at a local wifi network. Though at the end of the day, this is just a regular Nintendo DS with a screen missing, and all of its functions can be replicated on a retail DS.

The main unit is very barebones. It has a DS cartridge and a SD Card slot, both locked away with a tab that can be unlocked by unscrewing it with a Philips screwdriver. The AC port used is a Nintendo DSi charging port, and the only way the unit can be turned on is by plugging in the AC adapter.

On the back are 2 screwholes for mounting the unit onto a wall. Screws and mounting pieces are included.

A special version, with stickers and marked as "NDPXXXXXXXXX" was sent to the United States Federal Communications Commission.

The main difference from this unit is that it has the ability to read DS(i) development cartridges. This feature was removed from the ZS models.

The development cartridge also has a yellow label that says "NWD". It has been rumored that this stands for Nintendo Wi-Fi Development.

Currently, one beacon cartridge is known to be dumped. This cartridge was used at Best Buy. 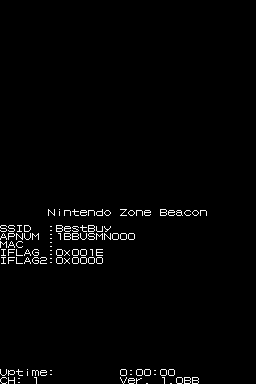 The Nintendo Zone WDB is the middleman for a Nintendo Zone setup, as it receives demo data from the beacon. The beacon alone cannot operate without the WDB cartridge.

Holding down the touch screen on startup reveals the settings. From here, you can change the Nintendo Zone servers, search for more systems that are running the WDB software and setup an internet connection, which is the same menu seen in various WFC-enabled games like Mario Kart DS.

Nintendo Zone operating on a Nintendo DS Lite Source for manuals and info on FCCID.io