The Wii U GamePad went through multiple revisions during development. 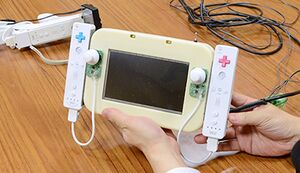 An early prototype of the Wii U GamePad, which showcases the early design with the two Wii Remotes attatched ot a monitor.

The Pre-2011 GamePad was one of the first pieces of hardware conceptualized for the Wii U, consisting of a screen connected to two Wii Remotes.

By late 2010, the Wii U's Cafe SDK reached a point of usability, and may have been released to third-party developers; there is documentation featuring references to the GamePad technology being a part of the SDK during this time. 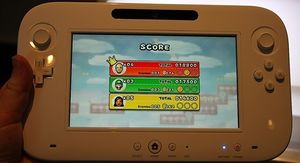 The E3 2011 GamePad was similar to the released version, but with many design differences, most notably the presence of circle pads instead of analog sticks. However, this was not the only 2011 prototype GamePad; there was also the CAT-DEV v2 GamePad, which was an even earlier version of this GamePad which was black and rectangular, being somewhat similar to the pre-dev tool v3 Wii Remote in appearance.

Depictions of the E3 2011 GamePad can be seen in screenshots found within the data of the Wii U's System Settings application, showing very early versions of this application.