On August 23, 2019, a user receives a DSi that they purchased from eBay only to find out that it contains three unknown DSiWare applications pre-installed to the NAND. The NAND was quickly dumped and the contents were extracted. The system itself is a black DSi with no difference to a stock model, there's also a faint residue of what appears to be a rectangular sticker. The original seller has no idea about it and appeared to have been selling them in bulk, so it's unknown if there any more systems with these apps as this is the only one that has been found.

Based off it's name and how it works, it is believed that these were used for competitions to verify contestant's Pokémon, specifically the 2010 Pokémon World Championship (PWC). However, that year the competition used HeartGold and SoulSilver and Pokémon Black/White didn't release in Japan until September of that year, one month after the World Championship, and wasn't in the North America until March of 2011. It wasn't until the 2011 Pokémon World Championship that Black/White was used, so it's unknown why it says 2010. It also has a rule check tool for Pokémon Black2/White2 which wasn't used competitively until the 2013 World Championship. Some former contestants claim that they had to give their cartridge to a judge before entering, however they weren't allowed to see what they were doing. 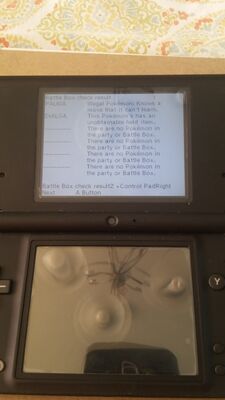 A photo of what happens when it does a check.

PWC2010 and PokemonBW2 Rule Check Tool both functions and has the same basic UI with the only difference being one is for Pokémon Black/White and the other for Black2/White2. On startup, the app will look to see if there are three files present on the root of the SD card: regulation.bin, regulation.cfg, and rule.prd. The original system bought didn't come with the SD card and the original seller has no idea about it, so the original files are missing. There is a workaround however, if you create a dummy file named the appropriate file names it will allow it to boot, but since it's not correct values it will not work as intend in verifying the Pokémons. In order for it to properly boot the cartridge, regulation.cfg must begin with these hex values: 01 01 00 00 00 01 00 00 00 00 00 00 01. It's unknown if there's anymore values used as these were found through trial-and-error.

If the files are there, the app will check to see if the right cartridge is inserted. This is interesting as there are no DSiWare that have Slot-1 access (that we know of that is). After it passes that, it will begin to check each Pokémon in the players party and Battlebox. It's believed that the rules.prd and regulation.bin are read during this check with rules.prd containing more advance checks like invalided/illegal movesets and banned Pokémon while simpler checks like duplicate moves and missing moveslots are done by the app itself. Afterwards it will display any issues it finds with each Pokémon and give the option to save the results as a log to the SD card. 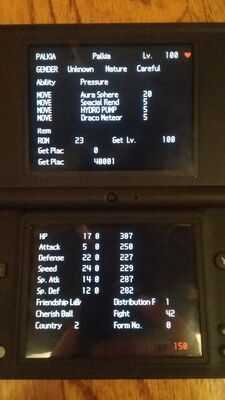 The log is saved as "logTYYMMDD.dat" and "logBYYMMDD.dat" (YYMMDD is the date, so something like Oct. 31 2019 would be 191031).  LogT is for the results from the party (T=Team?) and logB is from the Battle Box. These files can then be viewed using Log Viewer. There's also a third file that gets saved called "livematchYYMMDD.dat", it's unknown how this file is used.

Log Viewer is able to view files generated by both of the rule check tools. It has a separate page for Battlebox and Party entries and will list the trainer's name and Pokémon's information followed by any error codes. pressing the L or R buttons will change the date of the log to read.