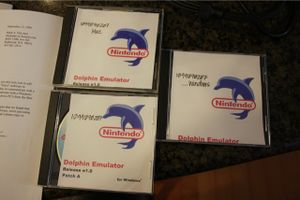 CDs of the emulator.

Not to be confused with the open-source emulator Dolphin

Dolphin Emulator is a program which was included with the GameCube SDK to assist developers in debugging their GameCube applications. The "emulator" is not actually an emulator; rather, it just interprets GC app source code as Windows/Mac (old Mac OS) apps. Nintendo's boxes were nowhere near powerful enough to run a real GC emulator, neither were most dev PCs of the time (if any).

This is a common Nintendo (probably a common industry) practice; the same thing exists for Wii in the form of the Revolution Emulator, and the Switch as part of the NintendoSDK. The DS also received an official emulator in the form of Ensata, although it was a real emulator rather than a code layer. Due to its design, you can't run retail games or any other applications on Dolphin Emulator unless you are able to rebuild them from source. The emulator was probably used for software development during the earlier stages of the GameCube's development cycle, as evidenced by SDK header file histories and the first release of the emulator being in 1999.

The original 1.0 version came out in late 1999, the very first time anything GC-related came out to devs, and "emulated" a very early version of the GC API. The version we have is the last one, which came out around GC launch and is the first (and only) version to emulate the final hardware/API (and even then many things aren't supported by it).

The 2.8 version of the emulator is the only one which is publicly available; as it was released a year before the GameCube's launch, it can be assumed that 1.0 (the oldest known version) is from very early in the GameCubes development lifecycle. This is supported by the emulator being the first OSGetConsoleType platform by ID. The 1.0 emulator was found on an online auction listing and has sold to an unknown collector. It has not resurfaced since.

The auction images mention a piece of software known as "Dave", although no further details are known as only a small piece of the paper is visible in the image.