The Nintendo DS(i) Classroom, known as v1.4J_kst in the DSi's System Settings is a specialized DSi version used in Japanese schools. This version contains many differences from a retail unit, including some applications exclusive to this version of the DSi.

"DS in the Classroom" 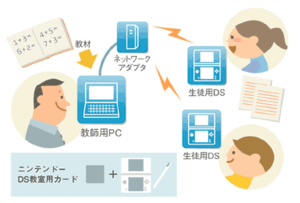 A diagram of how the system would work.

Furthermore, Nintendo goes on to say that Sharp System Products would work on 60 applications offering a variety of subjects, such as languages, math, history, and more. 30 applications would be for elementary schools, 20 for junior high schools and 10 for high schools. The system would then launch on February 2010 in Japan, but would be first showed off at the New Education Expo 2009, held in Osaka on June 17th and June 18th.

However, after the expo, in August 2009, Nintendo announced that the DS Classroom application would be exclusive to Nintendo DSi, despite an image of a cartridge being shown on the diagram. NTR-Classroom equipment was never released, but a DS Classroom cartridge was listed in an official Nintendo DS Master List.

The DS Classroom application opens up as a Nintendo Zone-looking UI and it will start searching for computers connected over the same Wi-Fi connection. Up to 50 people can join in. The application would work as interactive tests made by the teacher and the teacher would be able to view scores and rankings, similar in a way of Kahoot and Nearpod. 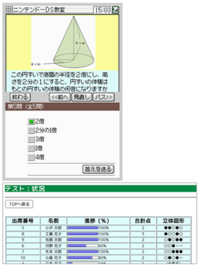 On the top is the question, on the bottom is the PC software recieving the answeres.

A teacher would install the Nintendo DS Classroom PC software and create a quiz. These quizzes can have a variety of questions about anything, with the teacher being able to add examples and images as well.

A NAND dump was made by Nintendo devkit collector Voodooween around May 2019. An image of the unit was included. 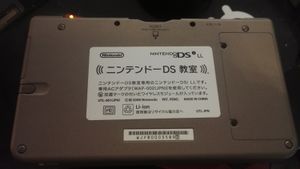 Image of the unit, with instructions on the back. Only "DSi LL" units were made. 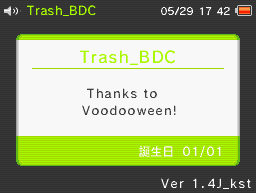 With Sharp System Products offering 60 applications, there's only 3/60 of applications found at the moment.

Images from the DS Classroom at the New Education Expo 2009